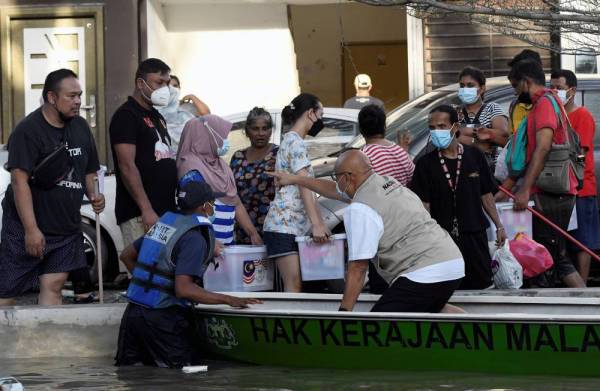 The recent flood showed how the government is more concerned about post-disaster relief than pre-disaster preparedness and delivery. The slew of relief efforts is a good thing, but it is also the “easiest” part of the entire ordeal.

Why were the authorities seem to be unprepared despite early warnings? Nearly a month ago the Irrigation and Drainage Department (DID) reportedly warned that certain parts of Malaysia could face flash floods due to the heavy rainfall by the Northeast Monsoon. The DID director-general Datuk Nor Hisham Mohd Ghazali also reportedly pointed to more frequent floods in recent years particularly in areas of rapid urbanisation.

Responding to public criticisms, Malaysia Meteorological Department (MetMalaysia) claimed that warnings of continuous rainfall that resulted in massive floods and landslides throughout Malaysia have been made since Dec 11, and that the department released an advisory early morning of Dec 17 when Typhoon Rai reached the country’s monitoring areas.

When monitoring by MetMalaysia and DID detects rain and river water levels above the critical level, flood operation centres would have been notified, triggering disaster management operations at the national and state levels.

Had the authorities mobilised man-power, assets, and disaster relief centres - even as late as within the 24-hours of MetMalaysia’s same-day advisory – they could have reduced impacts of the flood, and people could have been evacuated earlier.Far from being Malaysia’s first rodeo In fact, Malaysia even has a disaster management document called “Malaysia: Disaster Management Reference Handbook”, which also states that “Some of the worst floods in the past 30 years have occurred since 2003. Those that were particularly bad for Malaysia were in 2006, 2007, 2010, 2014, and 2017”.

It also noted that among ASEAN Member States, Malaysia had the highest percentage (67%) of the population exposed to floods.

Simply put, Malaysia should be good at dealing with this crisis.

Past Malaysia Plans also had various efforts to combat floods, so this cannot be majorly contributed to shortages in manpower, equipment, and logistical issues, but can be mostly explained coordination failure.

To be fair, though we had decades of experience, the recent heavy and prolonged downpour doesn’t happen often. Only two months ago, it was reported that MetMalaysia’s data does not show a significant change in the country’s average annual rainfall rate compared to five years or even a decade ago. Therefore, high levels of alertness may not have been maintained, contributing to the apparent lack of preparedness.

Also, it is worth noting that short-term governments could mean short-term memories. Hierarchical orders that come from frequently-changing politically-appointed heads of ministries and agencies may disrupt efficiency.

Therefore, despite Malaysia’s long history with floods, there is no continuity in policy implementation, weakening operational coordination. Every single disaster or event becomes a new learning curve.

Of course, this should not be the case as the civil servants in charge should be able to do their jobs even in the absence of political masters.

This was also a national-level crisis that calls upon both National Security Council (NSC) and The National Disaster Management Agency (NADMA) to take action.

Although NADMA’s effectiveness was only known in hindsight, the coordination issue is indicative of poor Federal and state-level coordination. Why else would there be an issue of NADMA’s directive not being adhered to? Early warning from monitoring agencies such as MetMalaysia and DID would be for naught if coordination between state and federal governments and agencies fails.

On this note, it is important that politicians don’t politicise disaster prevention and management. To ensure NSC takes charge quickly and equally to any and all regions, the NSC structure should be revised, to prevent political interests and sentiments to come in between people and disaster relief. Good optics will naturally come through real efforts that give desirable results.

People coming together to fill the role of authorities

Similar to how the people are using their own savings to help themselves to survive the economic onslaught of the pandemic, Malaysian individuals, businesses, NGOs, and religious organisations came to help one another.

The silver lining from the clouds of the unending rain was that it brought together sincere and concerned Malaysians, overcoming ethno-religious divides and truly embodying the spirit of Keluarga Malaysia through selfless efforts.

Although the armed forces, fire and rescue departments and other agencies were mobilised, they could have come sooner and they have their hands full.

Reports indicate many people were still stranded on highways and rooftops for days. Some flood victims at Taman Sri Muda were stranded until Sunday, with reports of unanswered screams of help from flood victims to next-door police station, and even reports of bed-ridden elderlies partly submerged in floodwater.

Is the spirit of Keluarga Malaysia embodied only between concerned citizens? Boats should be out with the authorities faster than they were stopped being sold to the public. Yes, it may be dangerous for the public to get involved in rescue missions and that ensuring their own safety comes first, but many felt compelled to assist as they were left with no other choice when they see people in need through their own eyes.

Flooding is an accounting problem. If the “water-ins” are more than the “water-outs”, it won’t be balanced, and we get flooding. The rain started on Friday and poured non-stop for over 24 hours, with volumes exceeding the monthly average. The amount and rate of water from the rain are more than could be slowed down (if at all) and redirected.

It is understood that it would be costly to build or upgrade every building and house to accommodate this. Therefore, means of diverting extreme amounts of water within a short time at the community level must be made.

For example, not all buildings at the heart of Kuala Lumpur have adequate drainage systems, which would cumulatively lead to localised drainage failure. In this case, the Smart Tunnel was developed to accommodate increased water runoff. As reported, the Smart Tunnel successfully diverted five million cubic metres of excess water, which prevented flooding at the city centre.

Likewise, new urban developments may have to be redesigned to ensure the replaced water storage and water runoff rate reduction (done by trees, vegetations, soil mixture, roots, etc.) is handled through a combination of better drainage systems locally, and at the community level.

Investment in design solutions is particularly important for essential structures such as electrical power stations. Reportedly Tenaga Nasional Berhad (TNB) had to temporarily shut down 333 power substations in six states due to the flood, and reportedly a power substation exploded in Shah Alam during the flooding.

In terms of prioritisation, these structures, both existing and new ones, particularly in known flood-risk areas, flood plains, and drainage corridors have to be upgraded with flood-proofing designs.

Flood-resistant designs apply to highway construction as well. Hundreds of people were stranded on highways due to floods and landslides. Bigger and better drainage and retaining wall designs, elevated highways in high-risk areas, emergency routes, and other redundancies should be considered to prevent highways from being flooded.

Other essential structures related to national security, the armed forces, healthcare facilities, water and food supplies networks, oil and fuel systems and reserves, disaster relief assets, and rescue organisations should be upgraded to be disaster-resistant. This will be crucial in non-natural crises as well.

Therefore, despite added costs, the people and the authorities must view this as an investment for future resilience and readiness. It requires long-term thinking, beyond temporary political narratives towards real care for the people and for national security.

Beef up non-structural solutions, more disasters expected in the future

Though some have brushed the flood as a rare occurrence, experts have reportedly warned that the combination of increased urbanisations, deforestations, pollutions, and climate change would likely increase the frequency and magnitude of natural disasters.

Specific to floods, there are many structural (engineering) solutions that have been published and documented that would supplement suggestions mentioned earlier, but hardware is only as good as the software running it. This includes new standards for urban development or deforestation to qualify for stricter ecological sustainability and better environmental footprint. Certain areas such as water flood plains and drainage corridors should be protected. As mentioned in a DID document, these include development restrictions, zoning for land use, population resettlement, and of course, flood forecasting and warning systems.

Monitoring areas should be expanded, forecasting capabilities from monitoring agencies such as MetMalaysia and the DID should be improved with 4IR technologies crunching big data from multiple sources and use artificial intelligence, and most importantly, there should be more frequent drills by Federal and State authorities.

Communication with the people should be improved through empowering the MyCuaca application (app) to be as widely used as the MySejahatera app. Even standard SMS in advance from the NSC/NADMA would have made a difference.

As mentioned previously, National Service may need to be properly revived, not only for military training but also for national unity, helping supplement manpower shortages at vaccination centres, and in this case, assisting in disaster relief efforts.

The Government appears to be doing more post-disaster, but there is no excuse for poorly executed pre-disaster coordination and delivery.

Dr Rais Hussin and Ameen Kamal are part of the research team of EMIR Research, an independent think tank focused on strategic policy recommendations based on rigorous research